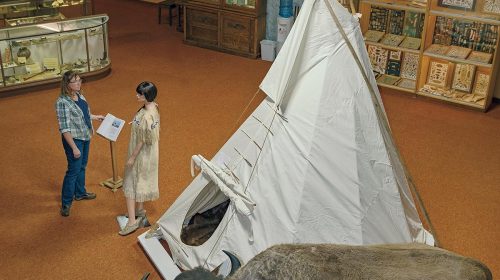 Swedish immigrants from Illinois arrived by wagon and horseback to found Holdrege in the 1880s. The history of the town and surrounding region is preserved in the Nebraska Prairie Museum. A small Lutheran church, country school, windmill, farm home and railroad caboose are displayed on the open grounds. Most noticeable to travelers going by on Highway 183, which is Burlington Street through Holdrege, is the guard tower standing by the road.

Camp Atlanta was established five miles southwest of Holdrege during World War II and it housed German and Italian prisoners of war. Camp Atlanta and the many more prisoner of war camps like it that once operated in Nebraska are all gone. The guard tower replica and an exhibit inside the museum interpret Nebraska’s World War II prisoner of war era.

Antique cars, pioneer-era home furnishings, tools and farm equipment are popular displays. The museum’s Town Square is indoors and is a sight to see. The exhibit is a full town within a building and is open for visitors to stroll through.