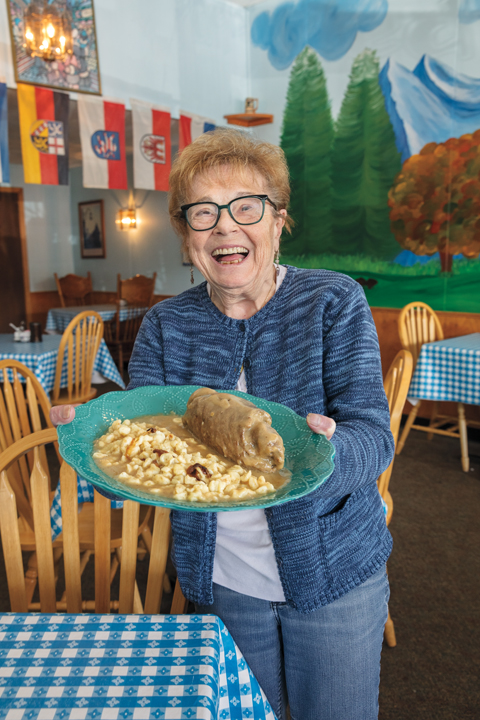 An exclusive look inside the pages of…

People on their way to work stop in at Gerda’s German Restaurant & Bakery in Omaha at 6 a.m. for coffee and homemade donuts. Many drive from Kansas City for Gerda’s jaeger schnitzel. Others wait outside on Leavenworth Street for more than an hour on Saturday mornings for her biscuits and gravy.

No matter if they’ve come to pick up a wedding cake or the best pan-fried chicken in Omaha, Gerda Bailey’s customers benefit from a promise she made to herself when she was ten years old.

“If there’s ever enough food to go around… gosh, we’re going to enjoy it.”

Gerda grew up in Germany during World War II and has never forgotten the sound of American bombs falling from the sky, tanks rolling down the street or the grumbling of her own wanting stomach. When she dreamed of schnitzels and sweet tortes, she never imagined she’d make her living one day serving them in Nebraska.

Her path from hungry German kid to owner of Gerda’s German Restaurant and Bakery is as winding and unexpected as the diverse menu that’s kept her in business since 1976. She married an American soldier stationed in Germany and didn’t leave her homeland until the 1960s. After a brief tour in California, the Baileys were transferred to North Carolina, where Gerda took a bakery job to help provide for the couple’s three kids.


Gerda spent nine years in the South and worked her way up to bakery manager. During her day job, she mastered the art of baking light-as-air éclairs. During her off-time, neighbors taught her how to cook collard greens, black-eyed peas and fried chicken.

“The secret is to soak the chicken in buttermilk,” Gerda said. “That and use good chicken. You know, from ones who still scratch the ground.”

The Baileys moved to Omaha in 1972, and Gerda first worked at Rotella’s decorating cakes. She sensed opportunity when a small bakery went out of business in the Dundee neighborhood. Well-intentioned friends warned her, “Gerda don’t do it,” but she took out a loan for $33,000 and opened her own bakery and lunch counter in 1976. Soon she was supplying cakes for all the local Baker’s grocery stores.

Gerda paid off her loan after seven years and countless pounds of flour. Four decades later she oversees a full-blown restaurant that seats 52. She has sacrificed a couple inches in height and her marriage to forty-one years stooping over the stove. She has earned a loyal customer base in return.

On most weekday mornings the “eight o’clock guys” take up residence at the diner-like nook in the bakery to discuss national politics and Omaha potholes. They deputize themselves to make fresh batches of coffee if the staff gets swamped by hungry college students.

On Thursday afternoons, University of Omaha Associate Professor Gwyneth Cliver hosts a Stammtisch, a German custom of frequently gathering with friends at the same table in a local watering hole. Flags of Germany, Tyrolean hats and a wall-sized mural of the Alps make a perfect backdrop for Cliver’s students to speak “auf Deutsch” for course credit, sample traditional dishes and often mingle with local German expatriates.

Gerda has served as a de facto cultural ambassador since her very first bakery task in America – icing a German chocolate cake. The cake, as she duly explained all those years ago and still does today, isn’t German at all. (Supposedly it is named after Samuel German, the American who created the type of dark baking chocolate often used in the recipe.)

In Omaha, her annual Oktoberfest celebration draws thousands. She caters language conventions, hosts high school field trips and has even appeared on morning TV shows to teach folks how to make pickled beets that alleged beet-haters will eat.

At 82, Gerda remains a dynamo, even after a recent illness left her outfitted with oxygen tubes that she must remember to remove before she starts cooking. One recent day she cranked out 18 cakes before settling down to a well-deserved cup of tea and reminiscing on the business she’s built with her own two hands.

“They’re going to have to carry me out of here feet first,” she said, smiling. “This is home. I’m so glad to be in America.”

Gerda Bailey might have been born in Augsburg, Germany, but she’s lived the American dream in Omaha.

Gerda’s recipes and secrets to making jaeger schnitzel, rouladen and eclairs are featured in the July/August 2017 issue of Nebraska Life Magazine. 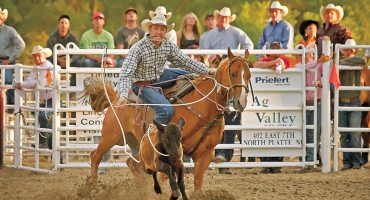 There’s no place like NEBRASKAland Days for celebrating Nebraska’s 150th birthday this summer. North Platte rolls out the Wild West red carpet June 14-24 for a supercharged sesquicentennial version of

What Makes Nebraska Different From The Other 50 States of the USA?

Are you thinking of moving to a new state for a fresh start? Among all the 50 states in the United States of America, it might get a little challenging to decide which