The soothing sounds of Medicine Creek’s tranquil waters meeting the Republican River is natural music serenading Cambridge. Dick Shoemaker and Becky Van de Bogart’s home overlooks the valley where those streams join. Music of another sort flows when the Nebraska Chamber Players assemble in the spacious home during Concerts on the Creek.

Shoemaker is tending the bar, clad in his trademark Hawaiian shirt and sunglasses when visitors begin arriving for the event he has hosted here since 2006. Drinks and socializing on the patio, near the swimming pool or while wandering the grounds is the first order of the evening. Musicians and music lovers mingle until the catered meal is ready. An audience of 100 funnels into the home and through the buffet, taking their seats to eat while examining the gallery of art covering each wall.

With the meal finished, lights dim and musicians appear with their instruments. The resonance of a single violin string pierces the air to begin the show, resonating through the room only feet from the audience members and with no imposing stage in between. Harp strings sing. A sorrowful bassoon mourns. The clarinet rises. The scene is intimate, with passion and effort visible on the face of each musician. The purity of the sound causes tears to form in the corner of some patrons’ eyes.

“Hosting the Nebraska Chamber Players is a joy,” Shoemaker said. “The elixir of life forms and magical moments happen when you mix together music, food, art, humans and a southwest Nebraska sunset.”

Intermission is another chance to rub elbows, refill wine glasses and dry eyes moistened through the joy of beautiful music.

As the last rays of the day flood the room, reflecting off brass horns and silvery flutes, the last notes hover over the audience, leaving only the confluence of streams to serenade the night.

Concerts on the Creek takes place June 24 and July 22. nebraskachamberplayers.org 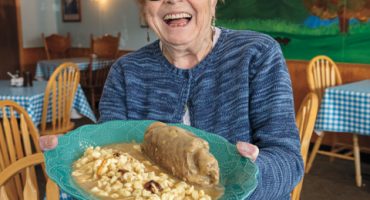 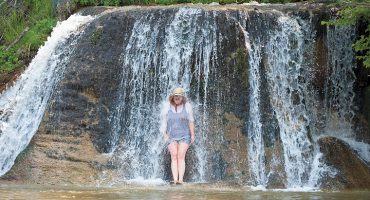 Nebraska is blessed with water. The same water bringing life to our crop fields and sea of prairie grass provides an ocean of recreational opportunities thanks to man-made reservoirs, natural Sandhills lakes