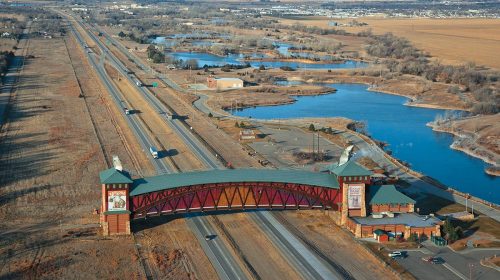 The Archway, built in 1999, pays tribute to the pioneers who trekked across the country on Nebraska’s Great Platte River Road. This 308-foot bridge spans I-80 near Exit 275 in Kearney, emulating a covered bridge at sunset. Visitors walk through exhibits showcasing the history of the West while about 20,000 vehicles a day pass underneath this tribute to the settlement of the American West.

Archway visits begin by meeting buckskin-clad frontiersmen and bonnet-topped pioneer women. Take an escalator up two stories to begin an interactive tour dedicated to the routes that migrating waves of people have used through the Platte River Valley for generations. Motion-sensing exhibits explain Native American hunting routes and the Oregon, Mormon and California trails. When you hear the train whistle you know you’re at the Transcontinental Railroad exhibit. A window looking out over I-80 and outfitted with a police radar gun shows the speeds of vehicles passing under visitors’ feet. An exhibit dedicated to the Lincoln Highway is complete with a drive-in theater display.

The Archway gift shop is a great place to stock up on coonskin caps, books and other souvenirs. Sculptures, walking trails and other exhibits are outdoors. Pioneering children love blazing their own trails in the TrailBlaze Maze. The Archway is open daily.